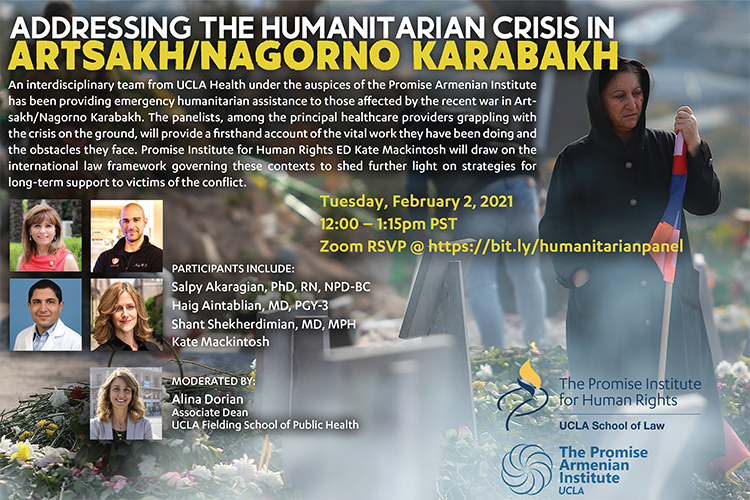 An interdisciplinary team from UCLA Health under the auspices of the Promise Armenian Institute has been providing emergency humanitarian assistance to those affected by the recent war in Artsakh/Nagorno Karabakh. In this panel, Drs. Shant Shekherdimian, Salpy Akaragian, and Haig Aintablian, among the principal healthcare providers grappling with the crisis on the ground, will provide a firsthand account of the vital work they have been doing and the obstacles they face. The challenges of humanitarian assistance and broader human rights protections during and after armed conflict are immense. Promise Institute for Human Rights ED Kate Mackintosh, who spent years working with Médecins sans Frontières (Doctors without Borders), will draw on the international law framework governing these contexts to shed further light on strategies for long-term support to victims of the conflict. The conversation will be moderated by Alina Dorian, Associate Dean, UCLA Fielding School of Public Health.

Salpy Akaragian, Ph.D., RN, NPD-BC, PHN is the President and the Founder of the Armenian International Medical Fund (AIM Fund) and Emeritus of UCLA Health’s Director of the International Nursing Program, and Nurse credentialing. She received a Bachelor of Science, Master of Science and Philosophy of Doctorate degrees in Nursing from UCLA School of Nursing. She was the US Partner Representative for USAID/AIHA grants from 1995-2004, directed multiple health care projects, and initiated reforms and development programs in Armenia. In 2004, she established The Cochlear Implant Center in Yerevan with the AIM Fund. She is the founder and the first president of the Armenian-American Nurses Association in California (1989) and in 1996 facilitated the formation of the Armenian Nurses Association in Armenia. She has served on the California Board of Registered Nursing as a board member, served as a Magnet Appraiser for American Nursing Credentialing Center, and is a national board-certified in nursing professional development. Salpy received Regional and National Gem awards from Nurse.com and in 2014, she received the Ellis Island Medal of Honor. She is a member of several professional organizations and has presented on various health-related topics at Local, National, and International Conferences.

Haig Aintablian, MD, PGY-3 is a resident physician in Emergency Medicine at UCLA Medical Center and graduate of the University of Arizona College of Medicine – Phoenix. Haig started college at 15 years old, and obtained his Bachelor of Arts in Biological Sciences, Summa Cum Laude, and his Master of Science in Molecular Genetics and Biochemistry from the University of Southern California. He has had over 30 research publications and presentations ranging from virology to astronaut associated pathologies. His most notable research has been with categorizing novel mutations leading to ACAD-9 deficiency, a significantly rare pathology in medicine. He has had research endeavors with NASA’s Johnson Space Center, served on multiple editorial boards for peer-reviewed publications, the University of Arizona College of Medicine Admissions Committee, as President of the American Academy of Emergency Medicine RSA, coordinated the Health Policy in Emergency Medicine lobbying campaign in Washington DC, and founded The Differential Dx Newsletter, one with over 4,000 monthly readers. In 2020, he was awarded the national “Resident of the Year” award by the American Academy of Emergency Medicine.

Shant Shekherdimian, MD, MPH is an Associate Professor of Pediatric Surgery at UCLA. He is actively involved in various initiatives in Armenia’s health care sector including efforts to improve post graduate medical education, introduce quality improvement programs in pediatric hospitals, and develop multidisciplinary care teams. Shant serves as an advisor to the Minister of Health, and is currently a Fullbright Scholar researching the feasibility of cancer screening programs in Armenia.

Kate Mackintosh is executive director of the Promise Institute of Human Rights at UCLA Law. Kate has worked in the fields of human rights, international criminal justice and the protection of civilians for over two decades, at headquarters and in the field for international and non-governmental organisations as well as for international criminal tribunals. For eight years, she worked with Doctors without Borders, providing legal and policy advice to operations in over 30 countries around the world, and leading advocacy in support of some of the world’s most vulnerable populations.

Dr. Alina Dorian is currently the Associate Dean for Public Health Practice as well as the Associate Dean for Equity, Diversity and Inclusion at the UCLA Fielding School of Public Health (FSPH). She is also an Associate Professor in the Community Health Sciences (CHS) Department. For the last 25 years, Dr. Dorian has been working in Armenia and Artsakh. Since cease-fire, she has been intimately involved in the re-organization and development of Artsakh’s health sector. She authored the country’s first National Health Plan and undertook the first-ever comprehensive review of the health sector to understand the true needs of the population, leading the first-ever large-scale national survey in the region which collected information on fertility and family planning behavior, child mortality, and the utilization of maternal and child health services. Following these efforts, she was awarded back to back USAID grants to implement nationwide primary health care programming through the American Red Cross, International Committee of the Red Cross (ICRC) and the American University of Armenia in Artsakh. She was granted the “Medal of Gratitude” by the former President of the Nagorno-Karabagh Republic, Arkadi Ghukasyan, for her substantial contributions to the reconstruction and development of the country’s healthcare system.