The Promise Armenian Institute at UCLA and the Promise Institute for Human Rights at UCLA Law present "The Armenians of Aintab: The Economics of Genocide in an Ottoman Province" by Dr. Ümit Kurt. This lecture is co-sponsored by the UCLA Richard Hovannisian Endowed Chair in Modern Armenian History, UCLA Center for Near Eastern Studies, the National Association for Armenian Studies and Research (NAASR), and the Ararat-Eskijian Museum.

One cornerstone of the wartime campaign against Armenians in the Ottoman Empire was the confiscation of their properties and wealth, which were subsequently transferred to Muslim elites and used in reshaping the domestic economy as well as covering wartime expenses. This talk will explore how the process of economic destruction directed at the Armenians of Aintab (present-day Gaziantep) was implemented. Shifting focus from state to society, thereby prioritizing the local roots of a mass violence in the making, this work will highlight the crucial role played by local elites and provincial notables, actors who prospered in the new social stratum through the acquisition of Armenian property and wealth.

Ümit Kurt is a historian of the late Ottoman Empire with a particular focus on the transformations of the imperial structures and their role in constituting the republican regime. Moreover, his research and teaching are grounded on theories of state and class, social identity and ethnicity. He received his MA from Sabancı University in 2008 and PhD from Clark University in 2016. Since then, he has held a number of postdoctoral positions in the Center for Middle Eastern Studies at Harvard University and the Armenian Studies Program at California State University, Fresno. Currently, he is a Research Fellow at Polonsky Academy in the Van Leer Jerusalem Institute and teaches in the department of Islamic and Middle Eastern Studies at the Hebrew University of Jerusalem. He is the author of Antep 1915: Genocide and Perpetrators (2018), co-author of The Spirit of the Laws: The Plunder of Wealth in the Armenian Genocide (2015) and editor of Armenians and Kurds in Late Ottoman Empire (2020). His recent book, The Armenians of Aintab: The Economics of Genocide in an Ottoman Province, was published in April 2021 by Harvard University Press. Ümit Kurt is the winner of the 2021 Discovery Early Career Research Award given by Australian Research Council. He is also Vice Executive Secretary of International Network of Genocide Scholars (INoGS). He has recently received Armenian Research Excellency Award of Calouste Gulbenkian Foundation. 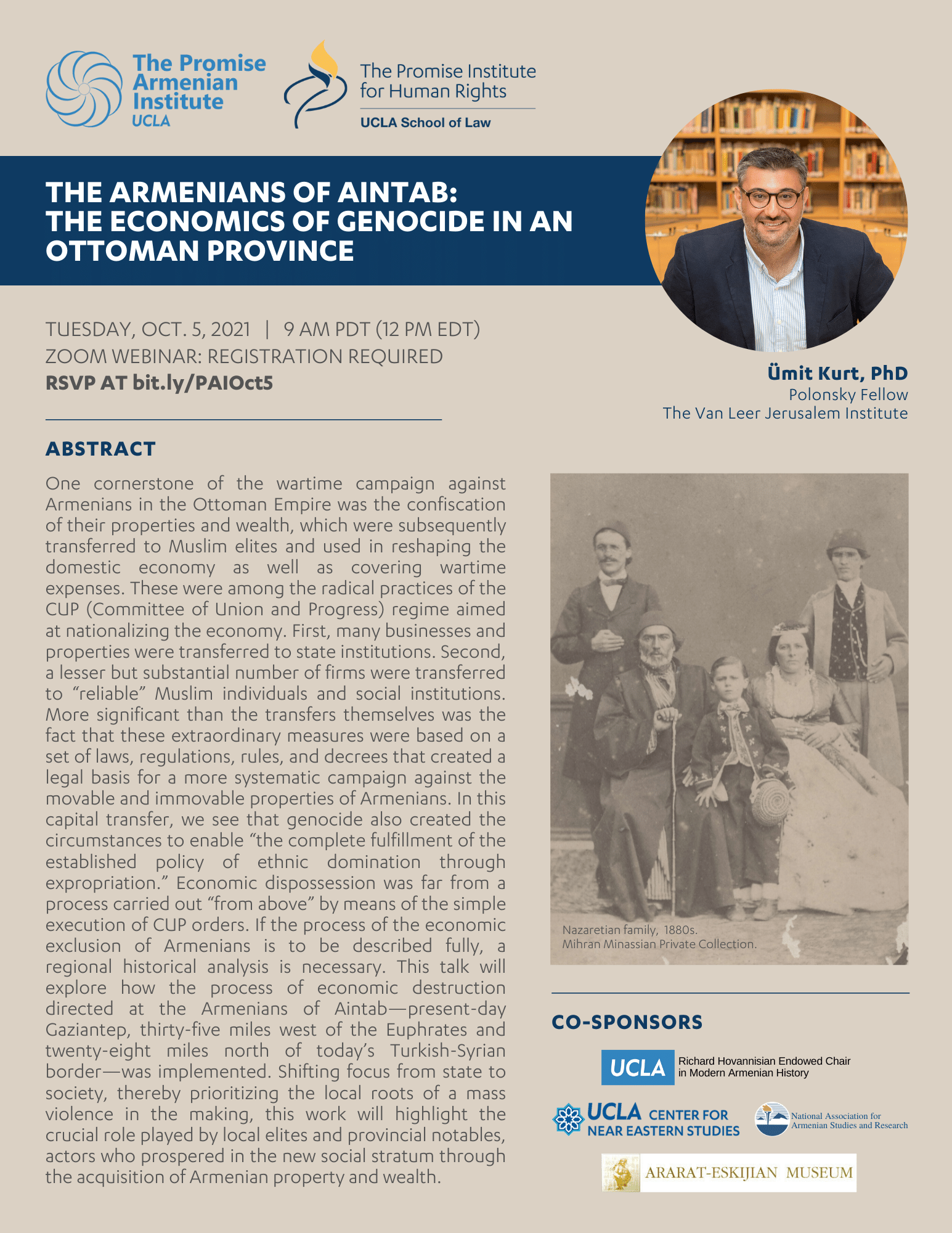 Join UCLA Law for an important conversation on the future of reproductive rights and the implications of SB8. To register visit http://bitly.ws/goBm

Read More
9:00 AM - 10:00 AM
Virtual [Zoom]
Yemen: Atrocities, Accountability and the Role of the US
Read More