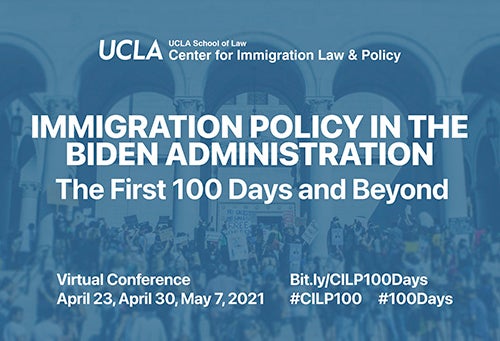 Welcome to the new Center for Immigration Law and Policy at the UCLA School of Law. With respected immigrants’ rights scholars Ahilan Arulanantham and Hiroshi Motomura at the helm, the Center will serve as a hub for innovative thinking in immigration law and policy, bringing together academics, organizers, advocates, and government officials to envision the world we want to see and work together to bring it into existence.

Our first event: Immigration Policy in the Biden Administration: The First 100 Days and Beyond, was a virtual conference convened over the course of three (non-consecutive) days: April 23, April 30, and May 7, 2021.

During the 2020 presidential campaign, Joe Biden repeatedly signaled his interest in adopting an immigration policy very different from that of the prior administration. After winning the election, several leaders from the immigrants’ rights movement joined the new administration, suggesting that fundamental change was imminent. As we approach one hundred days into this new era, it has become clear that the Biden Administration will reset U.S. immigration policies. But reset to what?

This conference brought together important stakeholders to address three central questions: First, what should federal immigration policy look like, both in the Biden Administration and beyond? Second, have the first 100 days put the country on a path toward achieving those goals, or is the reality mixed? Third, what should immigrants’ rights advocates do to achieve the world they want, in terms of both substantive demands and tactics to achieve them?

Leading Law Professors to Mayorkas: “Prosecutorial discretion guidelines need not be focused on who to deport, but who can stay.”

Read More
Events See All
9:00 AM - 10:00 AM
Virtual [Zoom]
Yemen: Atrocities, Accountability and the Role of the US
Read More
12:00 PM - 1:15 PM
https://ucla.zoom.us/meeting/register/tJwuc-2przgjG9zVfZjcBT5tksIPw_aJyQJw
Plata: 10 Years After and its Impact
Read More