Jump to Header Jump to Main Content Jump to Footer
May 7, 2019

The Black Law Students Association at UCLA School of Law was named 2019’s Student Organization of the Year at the school’s fifth annual Student Leadership Breakfast on April 28.

In its 50th anniversary year, BLSA hosted a gala celebration in April that featured guests from across the UCLA Law community and several Los Angeles-area dignitaries. Proceeds from the event will go toward a new student scholarship. In addition, during the 2018-19 school year, the group hosted its annual blood drive, a canned food drive with several other student organizations, and professionalism and etiquette training for its members. Its members were also instrumental in organizing a first-ever UCLA Law black law alumni reunion in March. 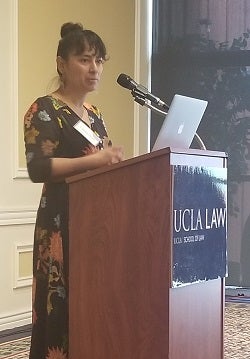 This year and during its half century of community leadership, BLSA has been a key driver of several enriching UCLA Law endeavors: a student-mentorship initiative that smooths law school entry for 1Ls; an array of volunteer activities in surrounding neighborhoods; outreach efforts including UCLA Law’s Diversity Admissions Open House and Law Fellows Program; and events such as a Real Music concert and celebration in honor of Black History Month.

Delaram Kamalpour ’19 was recognized for leadership of UCLA Law’s mock trial team and mobilizing student engagement in the U. Serve L.A. fundraiser and Connecting Art and Law for Liberation Festival. Sasha Novis ’19 was recognized for an impressive slate of activities that impact the public interest realm, including work as founder and chair of the Liberation Lawyering Conference. Sunney Poyner ’19 was recognized for service to several UCLA Law groups and leadership in founding the Disability Law Journal at UCLA, the first publication of its kind in the nation. Michelle Xu ’19 was applauded for extensive volunteer work and leadership of the UCLA Law Review, Journal of Law and Technology and Intellectual Property Law Association.

The event’s keynote address was delivered by UCLA Law alumna and lecturer in law Claudia Peña ’08. Peña is the co-founder and co-director of Repair, a program of the Mexican American Legal Defense and Education Fund that focuses on research and advocacy regarding disabilities and illnesses that arise from societal problems including violence, racism and inequality.