UCLA School of Law's Black Law Students Association honored legal leaders in the African-American community and raised more than $120,000 towards a new student scholarship at the group's 50th Anniversary Gala on April 4.

The event also had some Hollywood sizzle, with remarks from actors Garcelle Beauvais, Terry Crews, Kendrick Sampson and Courtney B. Vance, among others.

BLSA is one of the oldest and most active student groups at UCLA Law, with alumni serving in prominent roles in the legal professional around the United States. The new scholarship, with funds raised by BLSA from donors including several generous law firms, alumni, friends of the school and others, will support law students dedicated to contributing to African-American communities.

The creation of the BLSA scholarship represents the largest student-driven fundraising effort in the history of UCLA Law.

Cuevas is a long-time labor organizer and activist who seeks to build power among black workers by creating greater access to quality jobs, addressing employment discrimination and transforming industries that employ black workers. 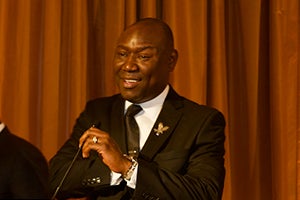 Crump's record of advocacy includes representing families in the high-profile and influential cases involving the deaths of Trayvon Martin in Sanford, Florida; Michael Brown in Ferguson, Missouri; and Stephon Clark in Sacramento. Crump has been recognized with the NAACP Thurgood Marshall Award for his work in civil rights and social justice.

In its 50th year, BLSA's accomplishments include mentoring underprivileged high school students through a partnership with the nonprofit organization Brotherhood Crusades and raising funds and donations to support Alexandria House, which provides transitional housing to homeless women and children. The group also established the Black Law Alumni Association, holding a gathering that included current students and alumni spanning five decades. In addition, the group raised in excess of $180,000, including $120,000 for the new scholarship.

Ajwang Rading '20, co-chair of BLSA for 2019-20 and master of ceremonies at the event, said, "The evening served as a powerful reminder that Black is beautiful, the law is powerful, and that change is coming. All attendees left inspired to do more and become more for our communities and answer the call to a higher service. We are so fortunate to have such a strong and generous community of supporters, from my mom to the gala committee to all our donors, they reflect what the world simply needs more of. As we said in the event program: Excellence is our standard. Justice is our pursuit. Freedom is our call."

Acclaimed New Carbado Books Focus on Race and the Law