In the fall of 1981, a couple of UCLA law students sat together, alphabetized by last name in their 1L section. They were Laurie and Guy Halgren, both ’84, who by that time had been married to each other for about three years.

Today, the Halgrens are both nearing the end of impressive careers—Laurie as a judge and Guy in private practice. But their road to law school, and to each other, was winding, as they described in a recent conversation punctuated by laughter and the banter of a couple who have been a team for many years.

Laurie and Guy met in the fourth grade, when they studied music with the same couple, Laurie taking piano from Luella Resta and Guy taking trumpet lessons with retired West Point bandmaster Francis Resta. In high school, when he was on the math team and she was in student government, they had friends in common but weren’t particularly close. After reconnecting at a party in college, they began dating. Their first date was to a showing of the four and a half hour long Ingmar Bergman film trilogy of Through a Glass Darkly, Winter Light, and The Silence. “We went for pizza in the middle,” Guy remarks.

The Halgrens married in 1978. Laurie, whose father was a dentist, worked as a dental hygienist while Guy owned and operated a plant nursery. One day, after realizing that dental hygiene “wouldn’t be something I wanted to do with my life,” Laurie came home from work and announced that she wanted to go to law school. She suggested that Guy could go, too.

Laurie says Guy earned the higher LSAT score between the two, to which Guy immediately adds that Laurie got better grades in law school.

The Halgrens began their careers at law firms in their native San Diego. When a group of the partners from his first firm, Luce Forward Hamilton & Scripps, left to found Sheppard Mullin’s San Diego office, Guy followed. He’s been there ever since, becoming chair in 2001.

After five years as a litigation associate with Gray Cary Ames & Frye, Laurie moved to the California Attorney General’s office, eventually rising to Deputy Senior Assistant Attorney General before putting her name in for judgeship.

It was after Laurie had been in consideration for the bench with no developments for about a year that Guy was nominated for the Sheppard Mullin chairmanship. The couple’s two sons were young at the time and Guy and Laurie knew both positions brought substantial time commitments. But Laurie encouraged Guy to take on the new challenge. Besides, they figured, it didn’t seem like the judicial nomination was happening any time soon.

But that prediction was wrong. In August 2001, not long after Guy accepted the chair position, Laurie was appointed to the San Diego Superior Court.

Being in their hometown of San Diego had advantages during this busy time, as Guy and Laurie relied upon their families to help care for their sons. Today, they note – with equal affection for both sons – that one is a lawyer and one is “absolutely not a lawyer.” In fact, one son followed in his father’s footsteps and is now an associate in the San Diego office of Sheppard Mullin, while the other works in software sales and marketing.

Guy recently retired after 20 years as chairman of Sheppard Mullin, where he grew the firm from 290 attorneys to over a thousand.

Laurie, who has served on the San Diego Superior Court since 2001, plans to retire in January 2023.

Wilcox recalls a time a few years ago when Guy invited her and a visitor from another Sheppard Mullin office over for dinner. Wilcox arrived at the Halgrens’ home after work to find Guy in the kitchen chopping peppers and lettuce. She speculates that Guy, a gardening enthusiast, may have grown the vegetables himself. When Laurie arrived home from the courthouse, she immediately began helping Guy with meal preparation.

“It was a wonderful dinner,” Wilcox says, noting that Guy and Laurie didn’t seem stressed about entertaining and cooking from scratch after a long day at work. “They’re just genuine real people, no matter what title they have.”

The Halgrens’ careers may have progressed in different directions, but Laurie says a common thread has been “a desire to do what’s right, to be fair.”

The Honorable Laura Whitcomb Halgren served in civil, criminal, and family court divisions. She has been on the court’s executive committee, as well as on other leadership committees. She currently serves on a committee that advises the California Supreme Court on judicial ethics. She even volunteered for several years with the CJA Judicial Ethics Committee ethics hotline.

Laurie’s colleague Judge Joan Weber says part of Laurie’s legacy will be her work in judicial ethics, noting, “She’s a statewide leader on ethical issues.” Weber notes that “you’d be surprised” how often judges face ethical issues – Can I attend this event? Can I write that op-ed? – and Laurie has been a go-to resource to help navigate those waters. Weber also points to Laurie’s founding of a court-clergy counsel that helps educate the community about legal issues and resources by engaging local clergy members about common issues their congregants may face.

When Judge Maureen Gaston, a former public defender, came to the bench eight years ago, she already knew Judge Halgren by reputation. As Gaston made her way on the bench, she says Laurie pointed her in the direction of areas that might be a good fit for her. With her word choice, demeanor, and “a light touch,” Gaston says Laurie respects everyone she encounters and “doesn’t make anybody feel stupid.”

As for Guy, Sheppard Mullin Partner Greg Labate ’90 says, “Diversity and inclusion is in his DNA.”

Since that time, Kang has continued to work with everyone from support staff to partners at the firm.

One of the first interactions Kang had with Guy was a small group session including top firm leaders. Kang notes, “He didn’t just tell someone in the diversity office to come and talk to me.”

It is fitting that, in April 2022, Sheppard Mullin established the Guy N. Halgren Diversity Fellowships. Starting in the summer of 2023, the firm will award three first-year law students who have a commitment to diversity and inclusion with a $35,000 fellowship. Fellows will join the firm as summer associates, with the intention that they will become associates after law school.

The firm announced the fellowships during the final partner retreat Guy attended before his retirement. He says he had “no clue” about the fellowships. “I was expecting a roast by my fellow partners,” he jokes, noting that he was very moved by the tribute.

In the legal profession, it can be easy to abandon fundamental decency to achieve professional success, Kang notes. He says one of the “core pillars of the UCLA identity” personified by the Halgrens is the pursuit of excellence coupled with human decency.

Wilcox says the Halgrens exemplify the UCLA culture, which is full of “impressive people with impressive records who take their education and make the absolute most of it.”

Wilcox’s first encounter with Guy was when he was a senior associate and she had applied for an associate position and Guy called her for a preliminary interview. Within the first few minutes of their conversation, Guy asked, “So, what do you think about unions?”.

Wilcox says she knew at that moment that “this guy doesn’t mess around.” It didn’t take long to learn that he was an organized attorney and valuable mentor. She remembers that Guy’s office was filled with piles of precisely arranged papers. “You’d walk in there and ask some random question and he’d know exactly where [the answer] was,” she says.

During those visits to his office, Wilcox says Guy would always invite her to sit down, no matter how busy he was. “I never felt like he was rushing me out.” 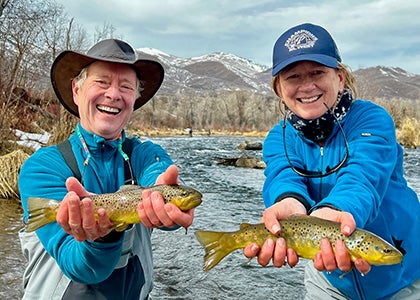 Laurie says she’s looking forward to her retirement. “I wanted to make sure Guy was really retiring” before she steps down, she says.

In addition to his passion for gardening, Guy enjoys golf and fly fishing and Laurie says Guy wants her to join him in these pursuits. She’s not about to become a golf enthusiast, she laughs, “so it looks like I’ll be doing more fishing.”

One activity they both enjoy together is travel. Laurie jokes that she’s looking forward to the first vacation where Guy’s “not looking at his phone the entire time” as he did as the firm chairman.

Laurie says she’s still figuring out what she’ll do after retirement. With the same spirit that led her to take a chance on law school so many years ago, she shrugs, “I’m up for an adventure.”

The Halgrens credit UCLA Law with helping students put themselves in the shoes of everyone encountering the legal system. They both used this perspective throughout their careers, in Guy’s management of an international law firm and Laurie’s work on the bench. Laurie notes that she sometimes receives letters from defendants thanking her for helping them turn their lives around.

They also say UCLA Law is not only a place where students are rigorously taught legal theory, but also where they learn the practice of law. With that foundation, Guy notes, “the legal profession was perfect for us.”