The publication, “Work, Pay, or Go to Jail: Court-Ordered Community Service in Los Angeles,” is part of a broad effort to combine research, teaching and public service in studying and addressing inequities in the region’s complex labor environment, and it is the first study to analyze a large-scale system of court-ordered community service in the contemporary United States. It details an elaborate enterprise that fails to achieve the goals of criminal justice reform, compels people into forced and unpaid labor, takes jobs from the mainstream paid workforce, and burdens people who live in marginalized communities.

A leading expert in employment and labor law, welfare, antipoverty policy and critical race theory, Zatz wrote the report with Lucero Herrera and UCLA Law alumna Tia Koonse ’11 of the UCLA Labor Center, and Melanie Sonsteng-Person, a doctoral student in social welfare at the UCLA Luskin School of Public Affairs. The study received substantial grant support from Arnold Ventures. It has been the subject of considerable attention since its October release, most notably in a front-page feature in The Guardian.

In studying the records of roughly 5,000 people whom the Los Angeles County Superior Court ordered to perform community service, combing through court records for about 600 cases, reviewing thousands of pages of court documentation overall and conducting 39 interviews, Zatz and his co-authors determined that community service — whereby criminal defendants perform jobs in lieu of paying fines or being incarcerated — is “a euphemism for a fundamentally coercive system situated at the intersection of mass incarceration and economic inequality, with the most profound effects on communities of color.”

To improve the situation, the authors recommend that courts minimize threats of jail time when sentencing people to community service, that alternative sentences not include forced labor, and that mandatory community service be transformed into meaningful economic opportunity through paid jobs. 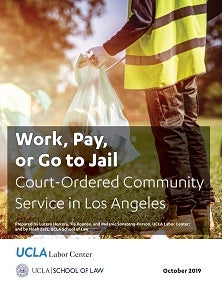 The study is part of Zatz’s broader research project “Get to Work or Go to Jail,” studying systems that impose work requirements and enforce them with threats of incarceration. The project has been supported by fellowships that Zatz received from the John Randolph Haynes and Dora Haynes Foundation and from the Open Society Foundations. It has led to a number of academic publications and informed the efforts of public interest practitioners on the ground

“Conducting this study and generating this report was a real team effort that brought together people from across the UCLA and UCLA Law community to expose and address a festering problem at the intersection of the criminal legal system and economic and racial inequality,” Zatz says. “We hope it will help people committed to labor rights to see criminal justice as a labor issue, and people working to roll back racialized mass incarceration to craft reforms with their labor implications in mind.”