Leading criminal justice scholars, practitioners and activists from across Southern California and the nation convened at UCLA School of Law on Feb. 22 for the first major event hosted by the school’s year-old Criminal Justice Program.

It featured many of the top thinkers and actors who are at the fore of a current movement to re-examine and re-frame the American criminal justice system, whose harsh impacts disproportionately affect communities of color. Panels focused on the distinct roles that the police, courts, prisons and community groups can aspire to play in bringing about a transformation in the criminal legal system. 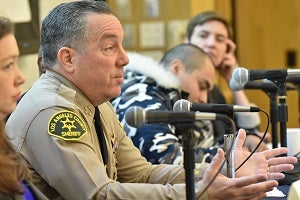 Vince Warren, executive director of the Center for Constitutional Rights in New York, delivered the keynote address. From his vantage as the head of an organization that has represented hunger-striking Guantanamo detainees and combatted stop-and-frisk police tactics in New York and solitary confinement at Pelican Bay State Prison in California, Warren zeroed in on how interactions with the criminal justice system affect the African American experience.

“We are handcuffed to an inhumane system that we are the keepers of, and yet we are the ones that are being asked to change it,” Warren told a rapt audience. He implored symposium participants to take action to reimagine rather than reform the criminal justice system by starting at the community level, despite the many institutional obstacles that are in the way.

“Between us,” he said, “we are more powerful than any pushback. But we just don’t know it yet.”