Lawyers, artists, activists and people impacted by the criminal justice system came together in April for the inaugural Connecting Art and Law for Liberation Festival, blending art and action in a weekend-long series of events at UCLA and two area juvenile detention facilities.

Sponsored by the Criminal Justice Program and Prison Law and Policy Program at UCLA School of Law, as well as UCLA's Prison Education Program, the festival included appearances by film and TV star Danny Glover and hip hop legend Chuck D. as well as leaders of arts and advocacy groups from across Los Angeles. 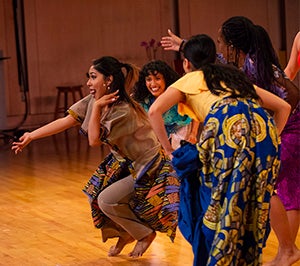 Members of the Contra-Tiempo dance troupe.

Glover and Bryonn Bain, director of the Prison Education Program at UCLA, opened the festival at Central Juvenile Hall with an excerpt from Bain's one-man show Lyrics from Lockdown and a talk by Glover, who spoke about the importance of art in inspiring activism and asked the youth to take the mic. The youth shared poetry and rap about their struggles and their resilience inside of juvenile hall. Later in the day, Glover came to UCLA to engage in a conversation with State Sen. Holly Mitchell (D-Los Angeles), a leading advocate for prison reform.

On Saturday, festival participants engaged in workshops where they created poems, screen-prints and murals on the topic of creating transformation in the criminal justice system. The workshops were followed by a screening of three short films highlighting the issues faced by those who have been impacted by the criminal justice system, with commentary from the filmmakers. Simultaneously, artists and activists Maya Jupiter and Aloe Blacc led hip hop and poetry workshops at Barry J. Nidorff Juvenile Hall in Sylmar. 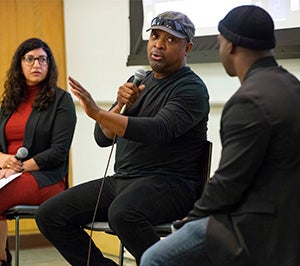 The final day of the event kicked off with a conversation featuring Chuck D., Bain and Alicia Virani, associate director of the Criminal Justice Program at UCLA Law. Participants then worked together in policy roundtables to determine how to integrate art into their activism and to identify concrete steps they could take to make change.

The festival was supported by the California Arts Council and co-sponsored by organizations including the Arts for Incarcerated Youth Network, Re:Store Justice, Was Incarcerated Productions, Homeboy Industries, and the Ralph J. Bunche Center for African American Studies at UCLA.