The future looked bright — and clean and efficient — when a team of law students took home the top prize in UCLA School of Law’s Lowell Milken Institute-Sandler Prize for New Entrepreneurs one year ago. Class of 2018 members Mac Kennedy and Mary Vu won $70,000 in seed funding for their company Mote, which is developing a device that filters toxic particles from car tailpipes. They worked with engineers from Caltech and the Lawrence Livermore National Laboratory to develop the winning entry.

On April 16, at this year’s final round of the $100,000 LMI-Sandler Prize competition — a signature event of UCLA Law’s Lowell Milken Institute for Business Law and Policy — six more teams of students from across the UCLA campus will seek to win vital funding by pitching their products in a Shark Tank-style competition. Meanwhile, Mote is based at the Los Angeles Cleantech Incubator, where Kennedy is working with a new partner and using last year’s win as a launch pad to success.

What are you and Mote up to now?
Since winning the LMI-Sandler Prize, I took, and fortunately passed, the California Bar Exam, which slightly overlapped with our participation in Startup UCLA’s summer accelerator. The accelerator provided a lot of hands-on training, teaching us how to build a company. Since then, we have been furiously prototyping at LACI in the arts district downtown. Many of the brightest minds in L.A. are in this building, including many UCLA alumni, working on different ways to solve the most pressing question of our time: How do we accelerate sustainability?

How does the incubator work?
LACI uses state-of-the-art programs and helps connect you with partners, mentors and advisors. My chief technology officer, Harshul Thakkar, is a Ph.D. chemical engineer with a background in carbon capture, including a project for the International Space Station, so we try to make use of our complementary skill sets. One thing that is so special about UCLA and LACI is the fertile environment for cross pollination between scientists and non-scientists. 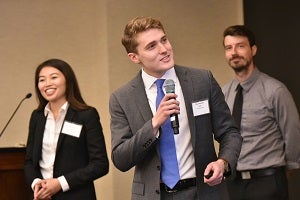 Kennedy, with teammate Mary Vu (left), makes his pitch at the 2018 LMI-Sandler Prize final round.

What has the process of prototyping your carbon-capture product been like?
Prototyping is the quickest way to learn, and your rate of learning is strongly tied to your venture’s chance of success — the sooner you can build something, and improve it, and actually ask people to pay for it, and then improve it again, the better. We have now gone through several iterations of our product, some of them literally duct-taped and wired together, with cardboard components. This is what prototyping is. It took me some time to become comfortable with that. We now have a great first product and will announce it soon.

How have winning the LMI-Sandler Prize and, more broadly, UCLA contributed to your success?
Winning the prize is everything for us. Without the competition, we very likely would not have had the opportunity to start our business. If you want to be at the center of the ascending movement to preserve the habitability of earth, UCLA is that place. UCLA Law faculty are at the forefront of innovative, impactful scholarship, particularly on climate change. [Editor’s note: In launching Mote, Kennedy received valuable mentorship from the faculty at UCLA Law’s Emmett Institute on Climate Change and the Environment.] I also highly recommend getting involved with Startup UCLA. Even outside their summer accelerator, like when we were preparing for the LMI-Sandler Prize, their venture consultants have been incredibly generous and helpful. It is hard to overstate how great of a place UCLA is to start a business.

What is driving force behind the work that you’re doing with Mote?
I look at the road today and see that 98 percent of cars are not electric, and it is unlikely that we will see anything close to mass EV adoption in the next 5 to 10 years. So we want to empower everyone to reduce their car pollution in the meantime. Toxic particles in the air, of which car exhaust is a major source, kill 4.2 million people every year, with countless downstream public health impacts. Kids, for instance, are frequently missing school due to attributable asthma, which also costs schools significant revenue. This is simply unacceptable, so we are highly motivated to help solve this challenge.