In the new book Mine!: How the Hidden Rules of Ownership Control Our Lives (Doubleday), UCLA School of Law professor James Salzman reveals the hidden rules that govern who owns what – from the reclining space behind airline seats to HBO passwords for streaming shows. Salzman is the Donald Bren Distinguished Professor of Environmental Law at UCLA Law, a faculty member of the Emmett Institute on Climate Change and the Environment, and one of the country’s leading scholars of environmental law. His co-author is Michael Heller, the Lawrence A. Wien Professor of Real Estate Law at Columbia Law School.

“At its core, human society exists to help us deal with competing claims to scarce resources,” the authors write. Many maxims on property rights, like “first come, first served,” do not always play out in practice. Instead, property rights are frequently disputed, with competitors using persuasive stories about ownership to claim their share.

Below, Salzman talks about how consumers navigate situations where property rights are unclear and how the stories we learn about property as children are also embedded in complicated 21st century disputes like tax rules for wealthy Americans. 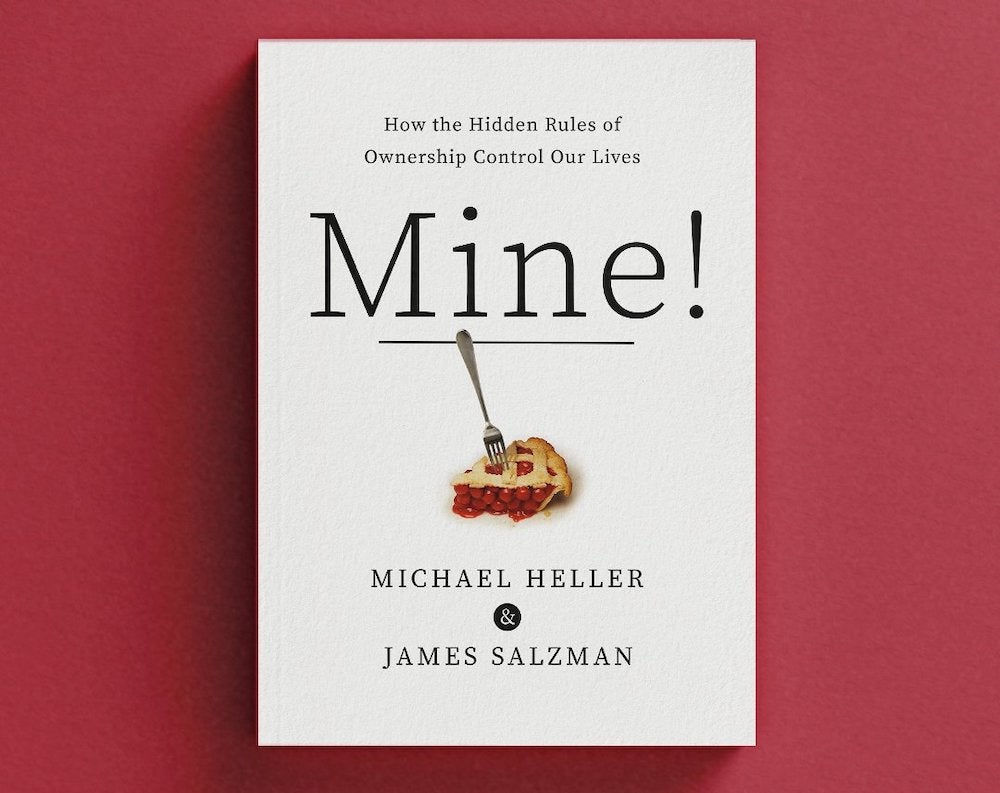 How are the rules of ownership embedded in our lives?
In every culture, “mine” is one of the first words that children speak. On playgrounds, all you hear is kids shouting “mine, mine, mine!” Ownership rules the sandbox. We assume ownership is natural, obvious, simple. But that’s just not true. Ownership is always up for grabs. Once you start looking for the hidden rules of ownership, you will see them everywhere. They determine fights over reclining airline seats and whether you can share HBO passwords. Also they are implicated in big issues like climate change and wealth inequality. In fact, it’s hard to find any conflict that isn’t framed by contested ownership.

You write that what’s “mine” reflects a choice among competing stories – what does that mean?
Let’s go back to the playground sandbox. A kid sets aside his shovel and another kid grabs it. The first kid says, “This shovel is mine. I had it first!” The other says, “No, I’m holding onto it!” Their fight looks like “mine” versus “mine,” but it’s really a deeper battle between two competing stories: “first come, first served” versus “possession is nine-tenths of the law.” These are two of just six basic stories that people everywhere use to claim everything. The same stories that kids use in the sandbox also operate on the global stage. Think about who gets priority for the COVID-19 vaccines. The stakes are higher, but the battle is over competing ownership claims for who should get to the front of the line.

How do businesses keep the rules of ownership hidden?
Airlines are masters in deliberately creating ambiguity in ownership. Think about the last time you flew. Did you lean back? Or did someone lean their seat into your knees or scrunch your laptop? You may not think of this as an ownership conflict but, in fact, it’s a battle over control of the reclining wedge of space behind the seat. Some passengers claim the space in front of their seat for their knees and laptop. No trespassing. Others claim the space because the recline button is attached to their seat and so is the reclining wedge behind it. Here, mine versus mine is really the stories of possession versus attachment. Airlines are selling the same space twice, once for the passenger who wants to use their tray table and again for the one who wants to recline. Passengers get mad at each other, but they should be mad at the airlines for pushing the ownership conflict onto passengers to work out themselves.

You’re an environmental law professor. Is ownership important in conserving natural resources?
Absolutely. Take the example of the hit television show Deadliest Catch. This featured fishermen racing out in the most dangerous weather to catch crabs in the Bering Sea. This Mad Max kind of competition on the high seas was really dangerous. Many people died – exciting for TV audiences but not for anyone else. But then, Alaska followed the lead of Iceland and used ownership engineering. The state created a new kind of property that attached fishing quotas to existing boats. This meant boat owners owned part of that year’s catch up front. They didn’t have to race anymore. They could wait to fish when the seas were calmer and crab prices were higher. And when the race ended, profits went up, and crews were much safer. The world’s most sustainable fisheries are all adopting this new approach.

What do you see as the major ownership issues of the 21st century?
Wealth inequality is surely important. Currently, about 1% of Americans control 40% of the nation’s wealth. It’s a remarkable statistic. As baby boomers die off, we are about to see the largest wealth transfer from one generation to another in human history – about $30 trillion. Most of this money will stay in the family, locking in this inequality for another generation. This concentration of wealth didn’t happen by accident but through hidden changes in the rules of ownership just in the past few decades. Remarkably, South Dakota has led the way, designing ownership rules that make it a tax haven for the super-wealthy to hide their money. As a result, everyday Americans pay more in taxes and get fewer government services. We don’t have to allow states like South Dakota to impoverish the rest of us. But to fix the problem, first, you have to know how ownership really works.

What is the key message of the book?
Ownership is always up for grabs. There is no natural, right answer for who gets what. At its core, the battle over scarce resources is a storytelling battle. Businesses and governments choose the story that quietly and powerfully steers you to do what they want. But ownership is always a choice. If you’re not the one choosing, then someone is choosing for you. Once you know how ownership really works, you can’t un-see it. And once you can see it, you can start to change the story as a consumer and a citizen.

Join a book talk, hosted by UCLA Law, on March 9, with James Salzman and Michael Heller, in conversation with critic David Kipen.

Join us for a panel on California's controversial new Ethnic Studies Curriculum.