The next big collaboration between technology and entertainment took center stage at “Hollywood Analytica,” the 43rd Annual UCLA Entertainment Symposium on March 15 and 16, where many of the industry’s biggest stars met to discuss the legal and economic impacts of innovations in an industry grappling with rapid evolution.

More than 550 guests attended the sold-out, two-day event, which raised funds for UCLA School of Law.

In a keynote conversation about the union of technology and entertainment, celebrated executives Meg Whitman and Jeffrey Katzenberg unveiled their new media company, Quibi, which aims to deliver high-quality video content in six-to-ten-minute “quick bites” to mobile devices by the end of this year. It is backed by $1 billion in funding from venture capital and entertainment studios. Whitman is the former head of eBay and Hewlett Packard, and Katzenberg was the chief of Walt Disney Studios and DreamWorks Animation. 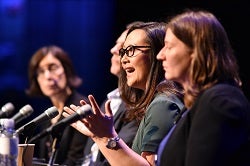 Speaking with leading entertainment attorney Kenneth Ziffren ’65, founder of UCLA Law’s Ziffren Institute for Media, Entertainment, Technology and Sports Law, Whitman touted Quibi’s technological innovations, including an adaptive app aimed at younger consumers. She said that her company will target the “in-between moments” when viewers seek a quick entertainment fix. High-quality and expertly produced videos, Katzenberg promised, will make Quibi stand out. “What [HBO] did to broadcast, ad-supported TV is what Quibi is doing to short form,” he said. “This is literally the sort of next evolutionary step for all of us as storytellers in Hollywood.”

In his annual examination of the industry landscape, media analyst Tom Wolzien zeroed in on the trends that undergird the entertainment industry’s digital shift, including record levels of streaming content in the United States and, importantly, overseas.

In a discussion about “Getting to the Source” of material that may be turned into movies, theatrical productions or TV shows, panelists described how the acquisition of books, life rights or other underlying content has kept up with the times. “Underlying material is really hotter than ever right now,” said attorney Hillary Bibicoff of Holmes Weinberg. 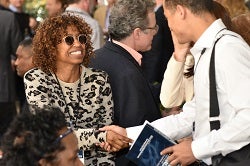 Another presentation, “Direct to Consumer — Existential Threat or Passing Fad,” warned that while the proliferation of new video services, including a forthcoming streaming app from Apple, gives consumers more choice, they risk flooding the market. “The amount of money that’s being thrown around right now for deals is extraordinary,” said Adam Glick, executive vice president of business affairs at Warner Bros. Television.

Cash is also pouring into one of the newest entrants to the media universe: Esports. A roster of executives from that burgeoning industry, which appeals to millions of young people who are naturally inclined to consume interactive and tech-fueled content, talked about how they looked to traditional sports organizations as models for their leagues of competitive video-game players.

The personal impact of this widespread blending of technology and entertainment was the focus of “Spotlight on Privacy: How Data Is Reshaping the Entertainment Industry,” which sorted through the California Consumer Privacy Act, a landmark law that takes effect in 2020. Its primary backer, Alistair Mactaggart, said that the law balances consumer-information protection with regulatory flexibility in order to ensure that businesses thrive. “I wanted it to be able to move with the times,” he said. 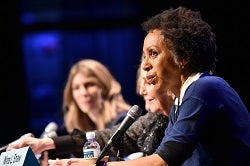 Changing times were also reflected in the event’s emphasis on women in the entertainment business, and women accounted for more than half of the symposium’s panelists.

For “Representation Is Not a Handshake Deal,” an all-woman panel including Time’s Up co-founder Nina Shaw and pioneering entertainment litigator Patricia Glaser discussed new rules governing legal ethics in California. These include an overhaul of fee-arrangement structures that affects the attorney-client relationship in Hollywood.

“#MeToo: What’s Next” addressed new approaches to gender equality in entertainment. For example, Oscar-winning producer Cathy Schulman (Crash), president and CEO of Welle Entertainment and president emerita of Women in Film Los Angeles, drew attention to the ReFrame Stamp that may be placed on a gender-balanced productions. Said UCLA Law alumna Barbara Boyle ’60, a longtime movie executive and member of the Entertainment Symposium Advisory Committee who is associate dean of entrepreneurship and special initiatives at the UCLA School of Theater, Film and Television, “We have the intelligence, the education and the tools to change … attitudes.”

The symposium culminated with “The Moral Contract: Contractual Regulation of Personal Conduct in Entertainment Deals.” Speakers on that panel emphasized that the current intense focus on personal behavior has led dealmakers to try to avoid scandal by including robust termination clauses in deals between studios and talent, brands and endorsers, and entertainment companies and their executives.