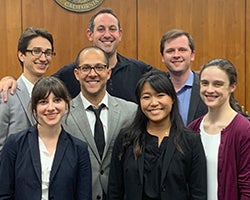 The tournament centered on a case involving a former prison inmate suing a prison for failure to provide protection from harm. Blake Berich '21 and Delaney Gold-Diamond '21 represented the plaintiff, while Brittnee Bui '20 and Jay Friedel '21 represent the defense. Each UCLA Law student was ranked as the top advocate by multiple judges in the competition. The team was coached by Elizabeth Smiley of Baron & Budd; JD Rees '14 of Sheppard, Mullin, Richter & Hampton; and Justin Bernstein, director of UCLA Law's trial advocacy program.

A week later, UCLA attended the American Bar Association's Labor and Employment regional trial tournament and made it to the final round, qualifying for the national tournament for the second consecutive year. The team will travel to New Orleans for nationals in January.

Trial Team Caps March With a Trio of Top Finishes

Read More
Events See All
9:00 AM - 10:00 AM
Virtual [Zoom]
Yemen: Atrocities, Accountability and the Role of the US
Read More
12:00 PM - 1:15 PM
https://ucla.zoom.us/meeting/register/tJwuc-2przgjG9zVfZjcBT5tksIPw_aJyQJw
Plata: 10 Years After and its Impact
Read More