UCLA School of Law hosted its annual convocation ceremony on August 23, where distinguished alumni and members of the faculty welcomed the law school’s newest class of students. The incoming roster includes a diverse and highly accomplished array of 524 people, including 310 members of the J.D. Class of 2022; 212 students who are pursuing a master of laws degree; and two candidates for a legal doctorate. 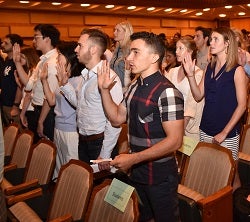 Students recite the oath of professionalism at the 2019 convocation ceremony.

The J.D. students were selected from 6,211 applicants. They come from 125 undergraduate schools in 34 states and seven foreign countries. California residents make up 58 percent of the incoming class. Forty-two percent are students of color, and 58 percent are women. Seventeen percent are first-generation students who have a parent or guardian without a college degree. The average age of class members is 24.

The students enter law school with remarkable educational and professional records. They include veterans of several military branches and former employees of the White House, U.S. Supreme Court, Congress, intelligence services, Equal Employment Opportunity Commission and Census Bureau. Incoming students have worked for organizations including PricewaterhouseCoopers, NPR, Mercedes-Benz, Universal Music Group, AT&T, NBC’s Late Night With Seth Meyers and leading law firms. Many are star athletes and creative professionals, two are Fulbright scholars, one is a commercial fisherman, one is an arborist and one is a pastor. 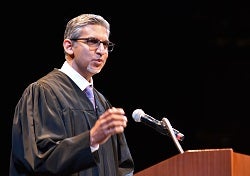 Justice Dhanidina ’97 welcomes the new class: “If you want to go far, go together.”

Members of the new class are also dedicated to public service and advancing public policy in areas including the environment, international human rights, animal rights, civil rights and prisoners’ rights. They have worked at the American Enterprise Institute, the American Civil Liberties Union, Doctors Without Borders, UNESCO, Teach for America, the Southern Poverty Law Center and the Council on American-Islamic Relations. Collectively, they are fluent in at least 17 languages.

At UCLA Law, 47 percent of the LL.M. students plan to specialize in business law; 33 percent will study media, entertainment and technology law; and others will focus on public interest, critical race studies, environmental law, human rights, law and philosophy, law and sexuality, and individualized programs of study. One student from South Africa is a Health and Human Rights fellow who will study public interest law, and two lawyers, from Brazil and the United States, will specialize in critical race studies. 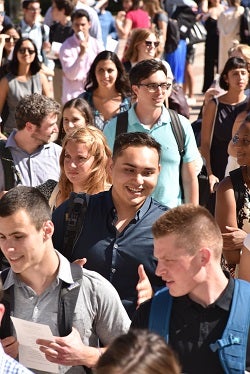 The LL.M. students have worked as attorneys at Baker McKenzie, Morrison & Foerster, Sony, Bayer and J.P. Morgan. Others gained experience in the Australian Chamber of Commerce and Industry, Colombia’s Land Restitution Unit, and South Africa’s National Film and Video Foundation. They have held key government or judicial posts in Germany, South Korea and Switzerland. They also include three Fulbright scholars, one active-duty JAG in the U.S. Army and a director of the BBC’s Doctor Who.

The S.J.D. candidates are already distinguished scholars whose work at UCLA Law will include analysis of information privacy law and research into constitutionalism and Arab monarchies. 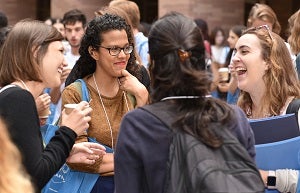 The new students participated in the convocation ceremony in UCLA’s Royce Hall after more than a week of orientation programs, including courses on the best practices in legal study.

“Take advantage of where you are. … Make meaningful connections with the students, faculty and alumni that you will be exposed to during your stay here. They are the ones who will enrich your academic, social and legal lives — but only if you let them,” said Dhanidina, who also encouraged students to give legitimacy to the voices of those with whom they may disagree and who recounted a recent visit to his parents’ homeland in Tanzania.

Prospective students can learn more about the M.L.S. Program from journalists who are current students as they share their experience in the program and how it has shaped their reporting and journalism careers.