Rapid developments in the sports-betting industry following a landmark U.S. Supreme Court decision were the focus of a conference featuring prominent sports agents, executives and attorneys on Feb. 8 at UCLA School of Law.

The event, “All Bets Are On,” was the latest convening of the In Series, sponsored by UCLA Law’s Ziffren Center for Media, Entertainment, Technology and Sports Law.

Steven Bank, UCLA Law’s Paul Hastings Professor of Business Law, introduced the event. He detailed how the Supreme Court’s May 2018 decision in Murphy v. National Collegiate Athletic Association blew open the doors to widespread betting on professional and college sports when it overturned a 1992 law that barred states from sanctioning gambling on sports.

“We’re sort of in the Wild West now, for sports betting,” Bank said, predicting a world where many stadiums will include betting windows, as only casinos or racetracks did for decades. Bank noted several areas of concern to which the Murphy decision gives rise. These include how to ensure the integrity of the games, who owns the raw data involved in betting, and the cultural risks presented when advertisements promote addictive behavior. 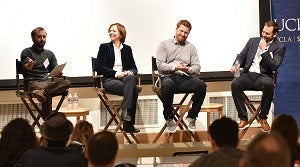 L to R: Zack Sugarman, Jennifer van Dijk, Kip Levin and Brandon McNulty discuss revenue in sports gambling at "All Bets Are On."

Greenberg, a veteran sports-media executive and former professional baseball player, noted that the specter of past scandals such as the 1919 Chicago “Black Sox” imbroglio and the CCNY basketball point-shaving episode of the 1950s have always soured leagues on legalized gambling.

Moorad, a trailblazing ex-sports agent and baseball executive, made clear that legalized sports betting creates opportunities for legitimate businesses that have thus far largely ceded the territory to illegal bookmakers. He recognized that the growth of gambling will make wagering a “much more prevalent” part of sports viewing and cause markets for “more precise data” to explode.

Nassar, who runs the licensing and marketing arm of the NFL Players Association, raised concerns about player safety, privacy and equal access to revenue. Still, he recognized that legalized betting on sports allows a previously unregulated business to exist in the daylight. Pointing to the proliferation of fantasy football, he said that gambling is “already percolating right below the surface.”

While acknowledging associated risks in personal data collection, cybersecurity and the promotion of addictive behavior, the panelists emphasized that legalized gambling is a natural extension of a pent-up consumer demand.

With avid fans already primed to bet on sports in which they are already emotionally invested, marketers are now keyed on appealing to casual fans and women. “At the end of the day,” van Dijk said, potential interest in gambling on sports “does cut across a wide swath of the fan base.”

Post-Pandemic Preview: 45th Entertainment Symposium Gets Back to Business