In a gripping presentation on April 2 at UCLA School of Law, alumna Leslie Gilbert-Lurie ’84 returned with her mother, Rita Lurie, to discuss the impact that the Holocaust has had on generations of people in her family and the ways in which public service for human rights has enriched their lives.

Gilbert-Lurie wrote the acclaimed 2009 book Bending Toward the Sun: A Mother and Daughter Memoir with her mother, who as a child in the early 1940s spent two years hiding from the Nazis with her family in an attic in her native Poland. During the ordeal, several family members died, and Lurie carried scars from the experience when she emigrated to the United States several years later. 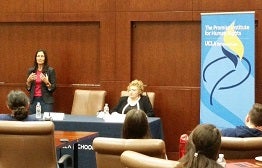 The book and the discussion before a standing-room-only crowd of UCLA Law students, professors and administrators, as well as distinguished guests, centered on how that history shaped the lives of both Lurie and Gilbert-Lurie. Now a successful activist, philanthropist and former television executive, Gilbert-Lurie told attendees that she still contends with much of the survivor’s guilt and separation anxiety that were first injected into her family during World War II, long before she was born.

She also shared how that family history has drawn her to causes related to human rights and social justice. Today, she is a member of the international board of directors of Human Rights Watch, in addition to leadership service to the Alliance for Children’s Rights, the Skirball Cultural Center and the Pacific Council on International Policy.

“I never assumed that if I didn’t step in and do something someone else will,” Gilbert-Lurie said. “Heroes aren’t born heroes. They’re ordinary people who decide one day to do something good.”