More than 150 leaders in human rights, critical race theory and third world approaches to international law convened at UCLA School of Law on March 8 for the symposium “Critical Perspectives on Race and Human Rights: Transnational Re-Imaginings.” 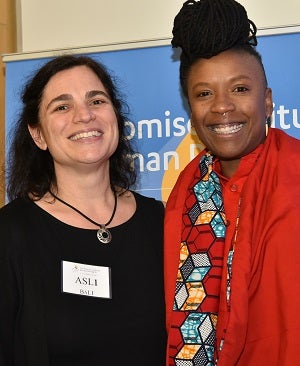 Organizers — led by Promise Institute faculty director Asli Bâli and her fellow UCLA Law professor E. Tendayi Achiume, who is the United Nations’ Special Rapporteur on Contemporary Forms of Racism, Racial Discrimination, Xenophobia and Related Intolerance — developed the theme of the symposium to explore the role of human rights in advancing racial justice and racial equality. They assembled speakers and panelists to examine human rights through the structural systems that perpetuate racial injustice and to connect these to the rise of populist ethno-nationalism across many countries.

“The conversation made possible by this conference is urgently needed now ... to create space for a sophisticated human rights analysis of the systems that perpetuate racial injustice,” said UCLA Dean Jennifer L. Mnookin.

In the event’s keynote presentation, Prince Zeid Ra’ad Al Hussein of Jordan, the former U.N. High Commissioner for Human Rights, said that the United Nations cannot combat international human rights abuses on its own. Rather, he stressed that national leaders must be active participants in the fight against racism.

That sentiment echoed throughout the day’s panels, which focused on the intersection of race and human rights as it relates to political equality, migration and socio-economic inequality. Featured participants traveled to UCLA Law from top universities in the United States, Australia, Canada, Ireland, Luxembourg, the Netherlands, Sweden and the United Kingdom.